"David Mars of Redondo Beach, CA, died peacefully on August 12, 2015, in the presence of this family. 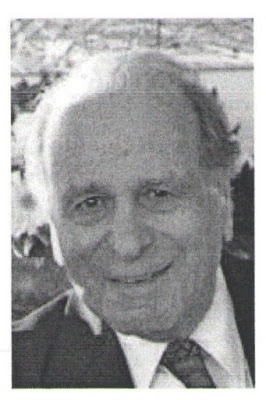 "Mars was Professor Emeritus of the University of Southern California Sol Price School of Public Policy.  Born February 21, 1927, in Philadelphia, PA, to Joseph and Sarah Mars, David was raised in Trenton, NJ, where his parents owned and operated a bakery.  His scholarly nature was recognized when young, and he went to study at Yeshiva in Brooklyn, NY.  He graduated at 16 from Trenton High School and enrolled at Rutgers University.  In 1945 he volunteered for the U.S. Navy, returning to Rutgers in 1946.  He earned a B.A., an M.A., and a Ph.D. in Political Science.  His first academic position upon graduation was at the University of Connecticut at Stors.  At Rutgers, David met Marien Weisser.  They married in 1954.  Their son, Robert, was born in Connecticut, followed by their daughter, Betsy.  In 1960, David became Research Director for the Milwaukee Metropolitan Commission in Madison, WI.

"While at the naval training school in Monterey, CA, sitting on the sunny beach in January, David had decided that he must relocate to California, and in 1962 he joined the Faculty of the School of Public at the University of Southern California.  The school had a program in Rio de Janeiro, and David moved there with his family.  In 1965, they returned to Los Angeles where he remained until retirement.

"David was a memorable teacher, a passionate scholar, and a creative leader.  As its Director in 1969–1971, he led the school safely through a particularly difficult time when there was great student unrest through opposition to the war in Vietnam.  His ability to ease discussions and his abiding sense of fairness meant that, when no longer Director, he was still often asked to chair meetings.

"He was also committed to public service, serving on the Torrance Human Resources Commission from 1977–1981, followed by the Torrance Planning Commission from 1981-1987. In 1991, he retired to care for his ailing wife but remained active in the USC Emeriti College, giving highly-attended lectures.  He was an involved parent and grandparent, providing a role model for everyone by remaining physically and mentally active.  He played tennis six times a week until the age of 84 and completed the New York Times Sunday crossword puzzle in ink every week.  He loved opera and classical music, and he read avidly and widely.  He was also a charismatic storyteller, often entertaining audiences of family, colleagues, students, and friends, and he loved amusing his grandchildren.

"After Marien's death in 2000, David found new happiness with Joan Neild Banes.  They married on his eightieth birthday in 2007.  He is survived by her and his two children, their spouses Melanie Mars and Jim Naphas, and three grandchildren, Daniel and Katie Naphas and Montana Mars.  David was respected and loved by all who knew him and will be deeply missed.  His remains will be cremated following his wishes, and a later memorial will celebrate his life."

"The portals of heaven are hushed to greet humble David Mars, a modest man who never sought the limelight, polite, mild in manner, wise and shrewd in advice, a learned person devoted to social justice, tolerance, peace and goodwill.  He did not seek riches or fame or publicity but got on with the job, a dedicated teacher and thoughtful scholar.  He was a blessing to every gathering, one of those whose loyalty and reliability were guaranteed, a respected figure to one and all, one of the old school devoted to public service and communal welfare.  He was a quiet witness to events, a pragmatist with firm principles who stood his ground against unfairness.  Unfortunately, declining health marred his aging.  Fight as he did, his strength was eventually exhausted, and he came to accept his inevitable fate with courage.  He will be sorely missed by all those whose lives he impacted.  He had no enemies.  He goes with grace, resounding to the blessing of the Cohanim.  Shalom.  Salut.  Fond Farewell." 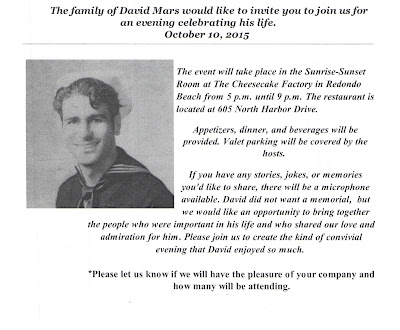