A Party City store in San Dimas, CA, was crashed into on Halloween afternoon, Saturday, October 31, 2015.  I shop at the Trader Joe's next door every Sunday morning.  Trader Joe's employee Chris, with whom I spoke the following morning, told me that she had been on duty at the time of the crash and that the walls shook violently.  She said that two Party City customers who had been in the store at the time of the crash came into Trader Joe's afterward and appeared uninjured but visibly shaken.  I took this photo Sunday, November 1, 2015, at about 8:15 a.m. 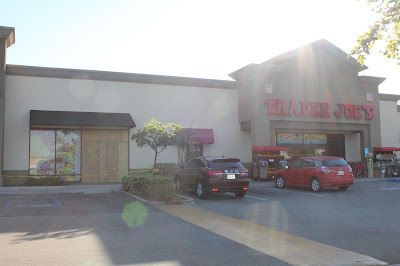 The following brief article appeared in the online edition of the Los Angeles Times on October 31, 2015.

"A 14-year-old girl was hospitalized with injuries she suffered Saturday after a car crashed through the window of a Party City store in San Dimas, authorities said.

"A 35-year-old woman driving a Mercedes-Benz C250 was in the parking lot when she lost control of the car and crashed through the window of the store on West Arrow Highway shortly after noon, the Los Angeles County Sheriff's Department said.

"Four shoppers, all younger than 18, were injured.  The 14-year-old girl was airlifted to Los Angeles County-USC hospital with moderate-level injuries, the department said.  The other three shoppers suffered minor injuries and were treated at the scene.

The cause of the crash was under investigation.

"A store employee reached by phone declined to comment.

"A shopper who witnessed the crash posted video on Instagram."


This is a screenshot of Leanne Suter (below) as she covered the story for the 5:30 p.m. local news broadcast that afternoon on KABC7 Los Angeles. 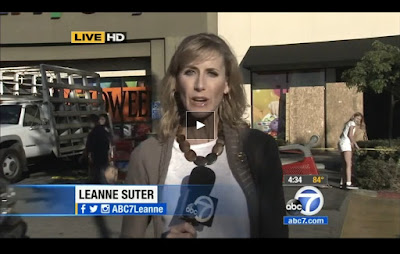