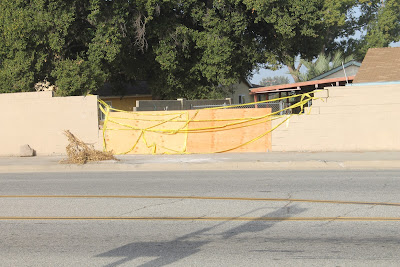 This is where the chase ended.  The wall is on the west side of Barranca Avenue just south of Cienega Avenue.  Below is the article from our local newspaper, the San Gabriel Valley Tribute.

"COVINA:  A Los Angeles County Sheriff's Department pursuit Friday evening ended in a traffic accident when the car collided with another at the intersection of Barranca and Cienega Avenues in Covina.

"The driver of a Nissan Altima, whose car was hit by a Toyota Sienna that was being chased by a sheriff's car, was injured and taken to a hospital, said Sgt. Omar Carbajal.  The extent of the injury is unknown, he added.

"Neither driver was identified, Carbajal said.

"The pursuit began at Cienega and Grand Avenues when sheriff's deputies stopped the Nissan, he said." But a passenger in that car jumped into the driver's seat and took off, Carbajal said.

"He was unsure if the passenger was arrested, he said."